Is the eight-hour sleep really a myth?

At this present season of my life, sleep is a precious commodity which is in tremendously short supply for me. I am currently (just barely) surviving on a sleep deficit one day at a time. How I long for just one night of respite to have at least six hours of continuous unbroken sleep. I am begging for one night, please. Just ONE night would make all the difference, I’m sure.

I came across this article on the myth on the eight-hour sleep...

“...Historian Roger Ekirch of Virginia Tech published a seminal paper, drawn from 16 years of research, revealing a wealth of historical evidence that humans used to sleep in two distinct chunks... a first sleep which began about two hours after dusk, followed by waking period of one or two hours and then a second sleep. During this waking period people were quite active. They often got up, went to the toilet or smoked tobacco and some even visited neighbours. Most people stayed in bed, read, wrote and often prayed...”

I for one think that ‘the myth of the eight-hour sleep’ is a myth in itself today. But maybe it’s simply because at the moment I am not given a choice: There is a great difference between waking up in a leisurely fashion in the middle of the night (preferably on a Saturday) and stretching your arms back pondering happily what you’d like to do, VERSUS having your gritty eyes painfully forced open at the sound of the baby monitor blaring loudly in one’s ear.

They say one should treasure every single moment of parenthood. EVERY single moment. Seriously? That too is a myth. There are plenty of moments of parenting that I truly treasure. But lack of sleep is really not one of them.

Yes, I know the years are short. I know this velvety milky baby smell will not last forever. I know my little ones will soon grow out of their little-ness all too soon. And I know the magic of their pure sweet innocence will someday fade away. I know.

But is it okay if I simply do not want to savour this feeling of sleep deprivation? In the end the image this bleary-eyed woman with dark shadows under her eyes staring back at me in the mirror will eventually be forgotten. And all I will remember are just the good ones.

For now, this is what I want most in the world: Sleep. Six hours of it. All in one go. That’s all. 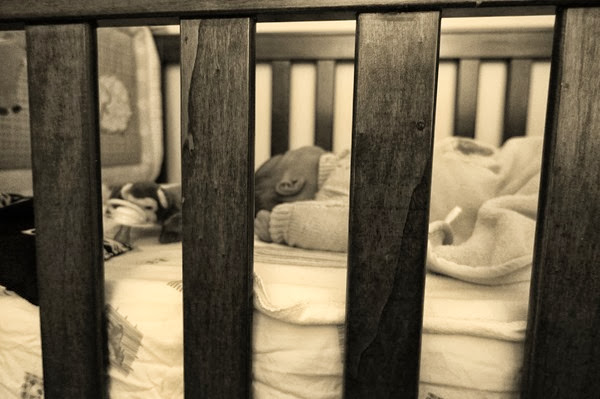 Linking up to Essentially Jess @ IBOT

Thanks for taking the time to comment - I love reading every single one of them! Although I may not be able to reply to each comment, I will definitely pop over to your blog to say hello.

I love hearing from readers and fellow bloggers alike. If you're a little shy or would like to get in touch with me directly, drop me an email at serenely@outlook.com 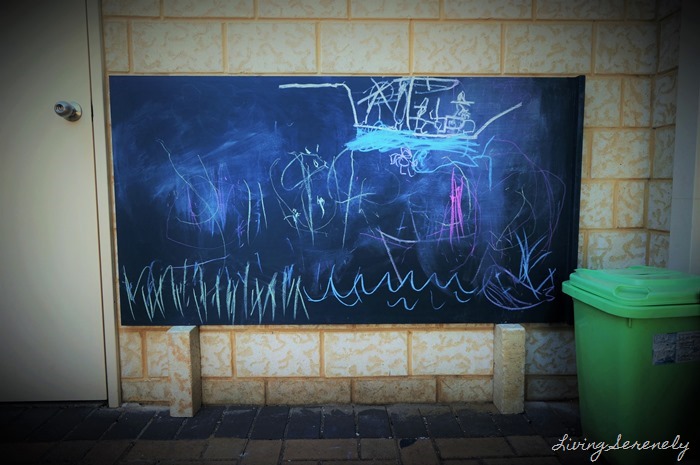 Today’s entry is not so much a post as it is just a way to showcase the latest addition to our outdoor play area… Our new mega sized outdoor chalkboard!

This past week has been all about snails.The children are always fascinated by the snails in our garden and ask endless questions about them.A couple of weeks back, one of my boys stumbled across a snail crawling along the ground.

A couple of weeks ago, I had posted this snapshot of these set of magnetic shapes I made on my Instagram. I received a few curious questions on how I made them.

And so Nathan’s very first day of kindergarten is over. It was a mixture of good, bad, sweet and sour. I think that so much happens throughout the day, it can be challenging for a little person to filter through it all.

My cup runneth over

These days my days are packed full to the brim. From the moment I wake up to the sound of Grace calling through the baby monitor and Nathan’s cheeky face peering at me over the edge of the bed… to the evening when I finally tuck them into bed and say goodnight.

Serenely
Hi! My name is Serene. This is my little ‘home’ where I hope friends can stop by to catch up, share thoughts, exchange ideas, where I can share good things I’ve found, and even share some yummy food... read more »